These kinds of manners are in accordance with the Edict about forbidden driving in natural surroundings (Ur.L RS 16/95). Fishing in all the districts is allowed in accordance with the following regulations; Regulation of the Slovenia Fishing Union about sports fishing, Edict about preservation of the endangered animal species and Regulation about sports fishing of the Cerknica Fishing Association. Fishing regulation for guests is printed on the daily fishing permit or is enclosed to it.

Information about spawning season or minimum size of the fish in the districts can be found on the following address. 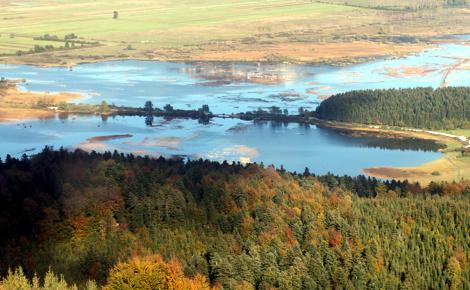 Western part of the Lake Cerknica is still water sports fishing district. On the east the borders runs from the Martinjščica Creek, its outfall into Žerovniščica Creek in straight line till Mali Oltar (Small Oltar) and on to the right side of the Vrata (Gate) and then continuing on the road to the hill Javornik. On the west the border starts with the big sinkholes on the bottom of the rocky slope in Jamski zaliv (Cave bay) and goes till the outfall of Cerniščica Creek and up the stream to Milavčev jez (Milavec dam) in Dolenja vas. The area of the district is 837 hectares which variants depending on the water level of the intermitted lake. In the dry season the district is only 9 hectares big. During this period water can be found only in the pond behind Rešeto and in the inflow of the lake, creeks Žerovniščica and Stržen.

In Lake Cerknica you can find fish like Pike, Chub, Tench and Burbit. The fishermen of the Cerknica Fishing Association have been inserting Carps into the lake. Red Eyes were first introduced into the lake in 1969 and Perch in 1990´s and they are both thriving nowadays. Perch can reach in length even 50 cm. You can find the biggest Perches in surrounding of sinkhole Karlovica and in the riverbed under the main bridge on the Lake which can be caught also on twitching. The Pike can be also caught with stremer in the shallow waters of the lake covered with grass. More and more popular is fly fishing on the pike, chub, red fin and perch. When the water level is high you can rent a boat in the village Dolenje jezero (authorized selling place for permits) and that way you can reach more remote and interesting places of the lake where you can fly fish.

There are also very large carps in the lake which attracts a lot of fisherman to this place. In year 2006 a new regulation was adopted which allows you lo fish the carp with two rods on a way catch and release. To preserve this trophy population of carps in Lake Cerknica as well as in Lake Bloke one can catch and take l carp which is shorter than 60 cm per day. The fish that is larger than that must be put to the lake unharmed.

For all tourist fishermen the fishing (on foot or with a boat) is only allowed in area on the right side of the main road through the lake called Rešeto.

On the top right corner of this web site you can find very useful information about the level of the water in the Lake Cerknica as well as what kind of fishing is possible at that moment. 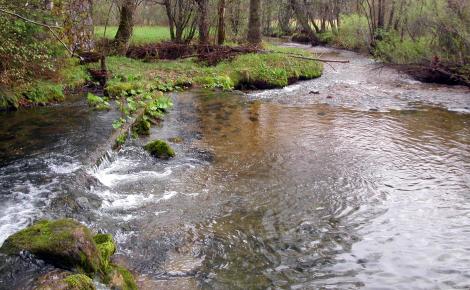 This salmonid district contains 8 hectare and starts at all the sources of the Cerkniščica Creek and goes all the way down the creek through Cerknica to the dam Milavec in Dolenja vas. There are some restricted areas where fishing is not allowed: up the stream from the main bridge in Cerknica to the barriers on the creek along with the branch of the creek from the barriers to the sawmill. Reserves Creek Struklj, Jazbine, Mahneščica and Mrzlek are also restricted.

The creek is home to trout, smaller population rainbow trout and chub. There are also some Eurasian minnows, bullheads, gudgeons and stone loach. The upper stream of the Creek Cerkniščica in the hills is still quite intact and invites you with clean and beautiful surrounding. You can explore numerous hidden spots and pools where you can still find descendent of the autochthon Trout.

Fly fishing is a bit more difficult because of the overgrown channels. The efforts are repaid when you fight with the vivid wild salmonid in the peaceful magnificence of the nature of the middle and upper stream of the Cerkniščica Creek.

The district starts at the source of the lake under the village Volčje and ends at the dam of the 0,8 hectares big artificial lake. The lake is of ciprinid nature which is inhabitant mostly by carps. In year 2004 the lake was sanitized. Sanitation included repairmen of the dam and removing of the sediments and mud on the bottom. With the lake deepened enough it was possible to put back into the water the first inhabitants of the lake like Eurasian minnows, gudgeons, shells and crayfish. Fishermen inserted big numbers of carps between 5 and 10 kg in the lake in 2006. You can fish for carp all year round. You can see if the conditions are suitable for fishing in the top right corner on this web site beside the water level of Lake Cerknica.

To preserve the trophy population of carps in Lake Bloke as well as in Lake Cerknica one can catch and take l carp which is shorter than 60 cm per day. The fish that is larger than that must be put to the lake unharmed. In year 2006 a new regulation was adopted which allows you lo fish the carp with two rods on a way catch and release.

In the summer when the water is warm it is possible to swim in the lake and to refresh in the nearby log cabin pub. You can fish in the early morning or late evening.

The best time for fishing is spring or autumn when there is peace and quiet and you can enjoj the beautiful surrounding. 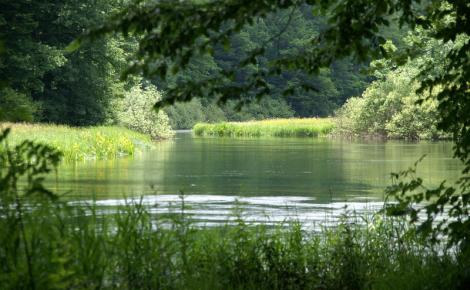 The Rak district is 4,8 hectares big and includes Rak Creek. It begins at the source of the creek in Cave Zelše, runs through park Rakov Škocjan and ends in sinkhole Cave Tkalca. The creek is of salmonide as well as of ciprinid nature. It is inhabited by pike, chub, tench, trout, barble, Eurasian minnows, bullheads, gudgeons and stone loach and also by indigenous species as grayling, Red Fin and perch. The fish are inserted in the creek every year so that the wanted quantity of the fish is maintained.

This district is quite suitable for fly fishing since there are also open areas where the channels not overgrown. When water level is high fishing for chub is very interesting since it searches for food in the grass of the flooded pastures surrounding the creek. You can find nice pieces of pike in thick grassy sections to. The trout and grayling are forbidden for fishing.