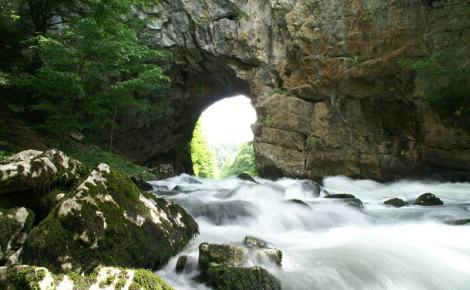 River Rak raises from the Zelše caves in the valley. The valley got its name after church Saint Kancijan which supposedly stood by the Great natural bridge.

The existence of the valley is linked with the dissolving of the limestone. The water that leaks through the cracks in the limestone slowly dissolves it. The result is big cracks and halls in the underground. In case of Rakov Škocjan water was dissolving the limestone for so long that the ceiling of the large halls and caves submitted under its own weight and thus created the canyon. Through time water transformed the canyon into the valley we know today.

The main features of Škocjan are remains of the ceilings of the submitted underground halls and caves; Small natural bridge that lies in the upper part of the valley and the Great natural bridge in the lower part. In between lies the green valley with river Rak.

Rakov Škocjan has many karst springs and sinkholes and in is secured as a regional park since 1949. Through the valley leads naturalistic study path which is marked with educational tables.

Naturalistic study path contains caves Zelše, Small and Great natural bridge, sinkhole Kotel, cave Tkalca and ruins of the church Saint Kancijan. Caves Zelše have from 8 to 50 m deep sinks through which you can see the stream of Rak. The Small natural bridge is the rest of the ceiling between to sinks. The upper edge of the bridge reaches 42 m above Rak. The Great natural bridge is the rest of the cave ceiling on the sinkhole side of the Rak. Its 23 m thick and is 37 m above Rak. Cave Tkalca is a 2845 m long cave with two entries.

The history of the Rakov Škocjan concerning mans life reaches in the prehistory. The first archaeological remains of the tools reach to Palaeolithic. Supposedly there was Illyrian province in the Iron Age. In the period of the Turkish aggression the people of the surrounding villages came to the valley for refuge. The firs record of the Rakov Škocjan can be found in the book of famous Janez Vajkard Valvasor called The Glory of the Duchy of Carniola issued in 1689.