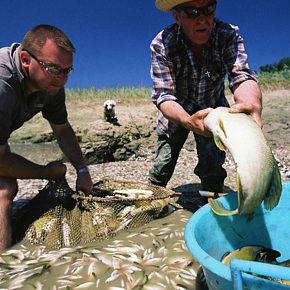 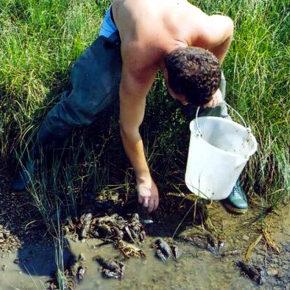 In the dry season the lake is completely dry) the main task of the members of the Cerknica Fishing Association is saving the fish and other lake life from drought.Lately saving is continuing through the whole year but is more intensive in the summer. The frequency of the dry up of the lake depends on the quantity of the rainfall on the area of the lake’s influxes. The main influxes are streams from the Bloška planota, Loška dolina and Babno polje. If there is a lot of snow on mountain Snežnik during winter the first intermitting is moved to May or even June because of melting of the snow.

Members are divided into groups that are located on different parts of the lake. They are monitoring the level of the water. When the level reaches the critical point they begin with the rescuing of the water life. They are taking the fish from the muddy shallow water and taking them on other parts of the lake where there is still enough water. They are continuing to doing so till there is enough rain to fill up the lake’s holes with water again. The dry season usually accurse once, rarely twice a year in the summer (June, July, and August). Dry season can also appear in the February if the winter is dry. (You can see more pictures in the photo gallery)

The famous climate changes in terms of warming the planet are beginning to show at Lake Cerknica also. Year 2006 was a breaking point in the history of intermitting. The water disappeared into underground 3 times. Once in winter and twice in summer. To make situation even more difficult the water is disappearing for longer periods at the time, even for more weeks.